I had the chance to interview Carol Guess and Kristina Marie Darling for Heavy Feather Review. It was a great time and I’m grateful to all involved.

I wrote a review for J. Bradley’s Bodies Made of Smoke for Heavy Feather Review’s site. You can read it here if you want. The book’s published by Housefire. And while you’re at it, subscribe to Heavy Feather!

I’ll be reading at a couple of places this month. If you’re in or near Ohio, please show up! Or, if you live far away and feel like traveling, that would be great!

The first is part of the Paging Columbus series at 6 p.m., October 11, at Ohio State’s Urban Arts Space. Jennifer Hambrick and Kelly Kathleen Ferguson will read too. The evening’s theme is “Hello darkness, my old friend.” Much thanks to Hannah Stephenson for the invitation to read.

The good folks at Heavy Feather Review (Jason Teal, Nathan Floom, Jason Carnahan and Kyle Bialko) asked me to read at 7 p.m., October 27, at the Cedar Lee Pub in Cleveland Heights. I’ll be reading along with Robert Loss, Shawn Maddey, Tessa Mellas, Alexis Pope and F. Daniel Rzicznek. The event is called “Like They Do in the Future.” Here’s the amazing poster they made: 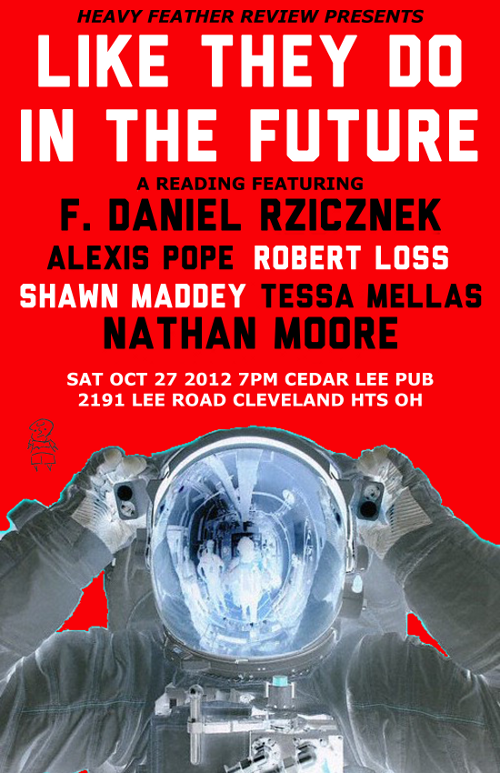 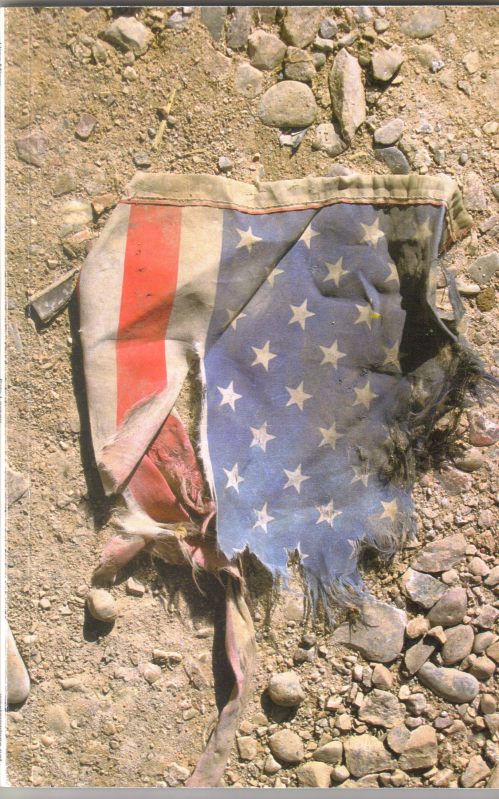 Ursa Minor, location of the north star, locator star, dependable guide, a title for a book of poems by Eric Larsen that continually pinpoints the reader and at the same time disperses their sense of foundational stability. This is the tension at the heart of the book – the tension of an explosion that is not a singular moment but a perpetual expansion. This is a book written in the middle of such an explosion, knowing that we are all exploding, that every observation is moving at incredible speeds away from every other observation. And yet they talk.

These poems are not mystical hymns to the supernatural. They do not look back hopefully to some shamanistic vision luxuriating in the warmth of a balanced universe that understands needs and pets fur. These are calculations made during a forest fire. There is hope here but it is hope that has shattered, is shattering, and that will be shattered.

“Orange safety cones conceal shells. Some / tipped in blow-back, brushed by wheels. / Each positioned for a shell game / or a chinois for molten lug nuts; / changing a tire in a sink.”

There are explosions of time. A disaster has happened, is happening and will happen.
The series of poems titled “Metro anaerobe” repeats the refrain “one hundred million years” – a number combining a human/nonhuman scale of time repeated in household products and fossils of various kinds: “unpredicted civilizations will unearth the fossilized remains / of Andromeda Sasquatch / with no dopamine traces.”

There are explosions of space. HO scale trains suddenly “life-size now, listing and bloating –.” The inside and outside, the there and here. The tension between the expanding catastrophe and the continuity of imagery is a brave construction of the human and nonhuman: “And over a telephone, the humans on Claret Beach / break even under a moon. / Their comprehensive selves remain stones when the sea recedes / and their internal worlds are carried away.”

Images here are both epic and intricate. There is a grandiosity coupled with intimate detail. Manipulations of scale. The poem as a “pocket universe.” That is, the poem as both refuge from and product of an infinitely expanding catastrophe. And the poem as a tiny universe. The micro and meta universe in conjunction and argument.

The overall structure expresses a state of continual parataxis. Images speak to each other over pages. Themes build and tear each other down. “The two concepts were never meant to touch; / in decay it becomes less defined.” This book is an aporetic hymn. Continually caught between center and edge – the fluctuating punctuating light.
To get “Ursa Minor,” go here. 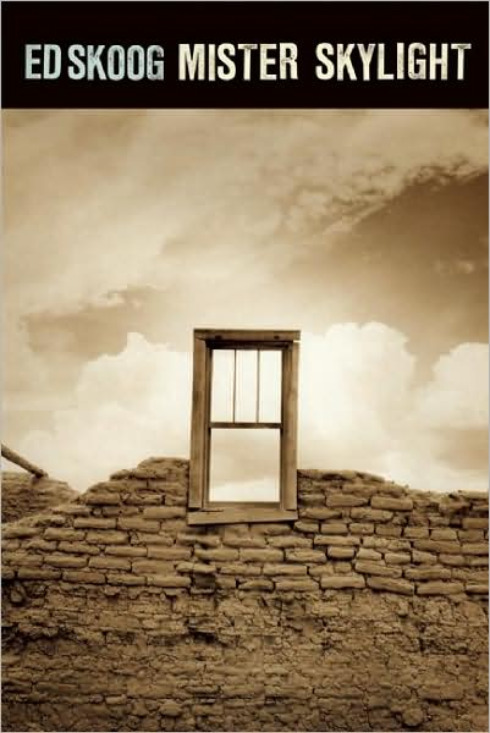 This is a review written for Read Write Poem’s Virtual Book Tour. Ed Skoog‘s new collection, Mister Skylight, from Copper Canyon Press, is a major achievement.
Skoog’s use of language is disorientating, vivid and surprising, all the things I love about great poetry. In a recent interview with Dave Jarecki, Skoog said “The people in the poems are real people, the family and friends, but they become imaginary through the process of poetry.” One of the wonderful things this book does is give us insight into this process and in doing so, into the primacy of the poetic imagination even in spite of, or hand-in-hand with a skepticism about this primacy.
The ability of poetic language to surprise is evident on every page. Take this image from “Home at Thirty”

The poem’s slow movement of hesitant return, the connotations of the household, of covering implied by “stucco” so much is communicated here.
Often the poems explore loss or the inability to communicate while at the same time communicating this through incredible imagery. As the speaker in “Recent Changes at Canter’s Deli” states

Who I am
and what I feel are irrelevant enough to be central
to the project of Contemporary American Poetry.

Here the poet and by extension the process of poetry, is caught between importance and marginalization. The tension of this position is captured by wild imagery, by imagery of wildness caught, as these lines from the same poem

Up in the haze some undiscovered animal
watches us, its plan mapped out, fire
swinging up the canyons, unfolding
until flame may flicker tip of sabertooth fang
in the museum where rare finds are hidden.
I, too, am a dinosaur.

The image is wild with movement and beautiful sound as the power of the poem to perceive the unnoticed threat is coupled at the same time with a sense of futility in communicating that threat. There is, throughout the book this exploration of the tension between of a kind of Wordsworthian idea of the power of poetry and the poet and the undercutting of this power.
One of my favorite poems in Mister Skylight, “Memory Loss,” offers a kind of object lesson on poetic language. There are a series of moments in which the speaker offers up an instance of poetic language and then provides a kind of explanation, as in

So when I write “starved tigers devour us
with an uncomfortable vitality”
I am thinking about all the people I’ve lost,
those torn, shredded, fouled, and swallowed
by the eagerness of car crash, cancer, stroke, old age, youth,
money, anger, love,
distance, madness.

Here you get the origin of poetic language and a view of its status an an attempt — an attempt to encapsulate in language what can’t be fully said. The loss is circled over and over until what we see is the importance of the attempt. The poem in a sense can never say it all yet the attempt is of utmost importance. This is the work and power of the imagination.
The next scheduled stop on the book tour is Jill Crammond Wickham on Nov. 8.